Capture 360° photos and create tours with the JobWalk App

The JobWalk App is the easiest way to contribute to your HoloBuilder project on-the-go. Learn how to add 360° photos and create a tour here.

NOTE: Before taking photos you should first upload at least one sheet to your HoloBuilder project. Read here to learn more.

1. In order to capture a 360° image, open the JobWalkApp on your mobile device. In your project list, open the project for which you would like to capture new images.

2. Open the respective sheet in the project that should contain the new images.

4. In the app, tap on a location on the sheet to open the context menu at the bottom of your screen. Tap on the now available grey round Capture 360 button to trigger the 360° camera.

NOTE: Alternatively, you can also capture a 2D photo without using a 360 camera - learn more. 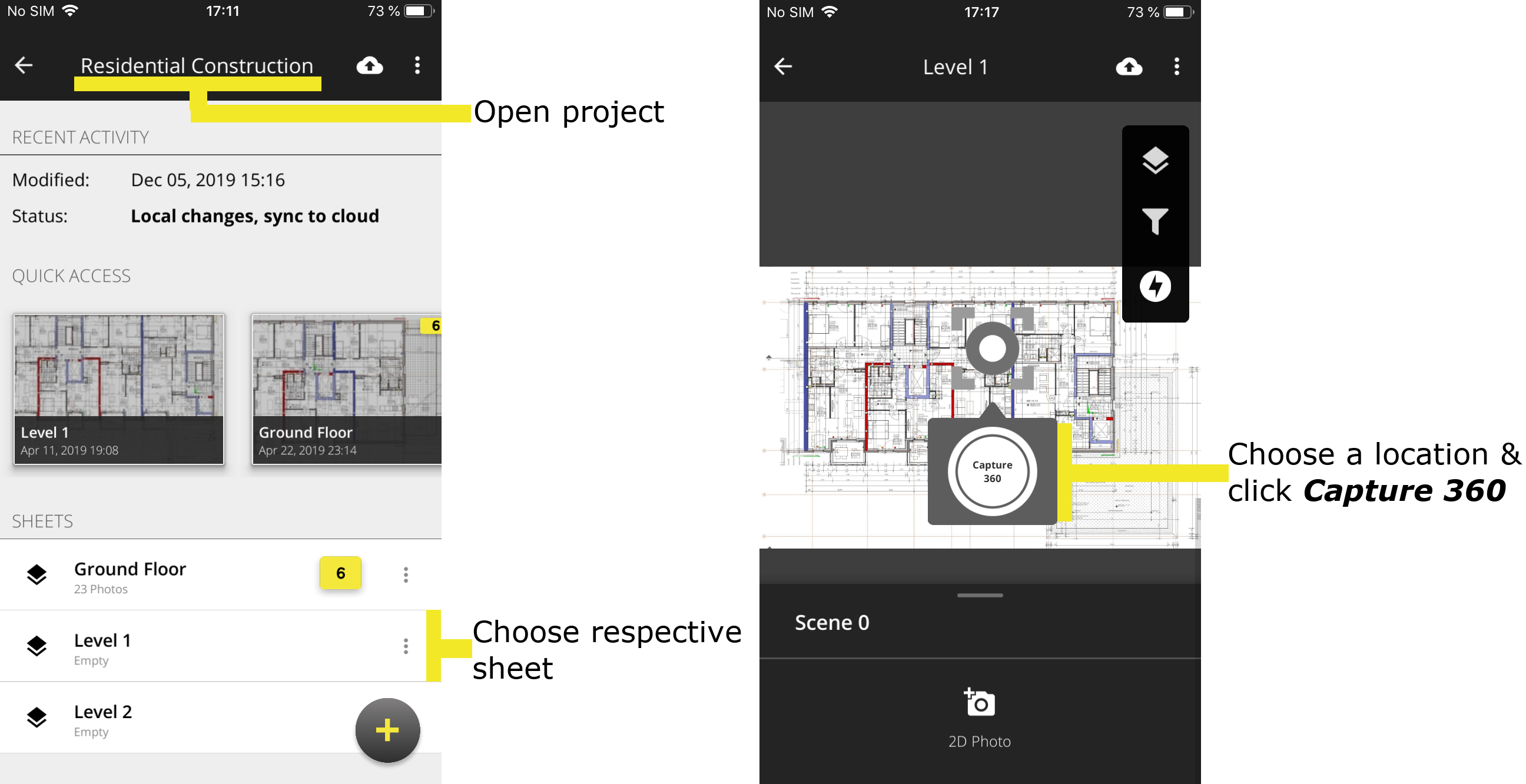 5. Optional (if a preview is enabled in the app settings): After taking an image, you can take a look at your 360° photo. If you are satisfied with the image, tap Confirm.
If you want to retake the image, just tap Retake to take another shot.

NOTE: If the image preview is not enabled, you can tap on the "Open 360" button in the lower-left corner after capturing the 360 photos.

6. To edit and change the room's name, tap on the small pencil icon in the upper right corner of your screen.

7. Return to the sheet view: A yellow circle, also called Waypoint, indicates in which rooms you already took pictures. To retake those pictures, rename the room or remove it from your tour, tap on the corresponding Waypoint, and select the Open function.

8. You can rename the whole sheet by tapping the edit icon when in the project overview.

9. Once you have finished your tour, tap the upload icon to queue it for upload to your HoloBuilder account.

Adding further information in the field

Include additional information such as 2D photo, markups, or categories to filter your project:

Add close-ups of specific areas directly in your 360 photo for more details.

Highlight certain aspects directly on site in the 360 photo.

Categorize your 360 photo on the go

You can easily categorize the new 360 images while capturing.

Note: To delete a link, tap on the link in the scene and select DELETE.

Edit your complete project in the web editor. Make sure to synchronize the version on your mobile device with the cloud so that you edit the most recent version of the web editor and no progress gets lost. E.g., learn how to link the 360 scene in the Web Editor here.

NOTE: To upload the tour to HoloBuilder and make it accessible in the cloud from wherever you are, your smartphone needs to be connected to the internet.

There are two possibilities for how you can upload your project:

(a) Sync all: In your projects list, click the Upload button in the upper right corner of your screen to upload all projects from your device to the Web Editor/Dashboard.

(b) Sync a project: Open a specific project that you would like to upload. Then click the Upload button, also in the upper right corner of your screen. This way you synchronize only one specific project instead of all projects on your device.

If you do not have access to the internet at the moment, or if you want to create another tour just tap the Upload icon to queue it for upload and carry on.

NOTE: If you forget to upload your scenes because you try to delete a project that has unsaved changes, the JobWalk app will warn you. 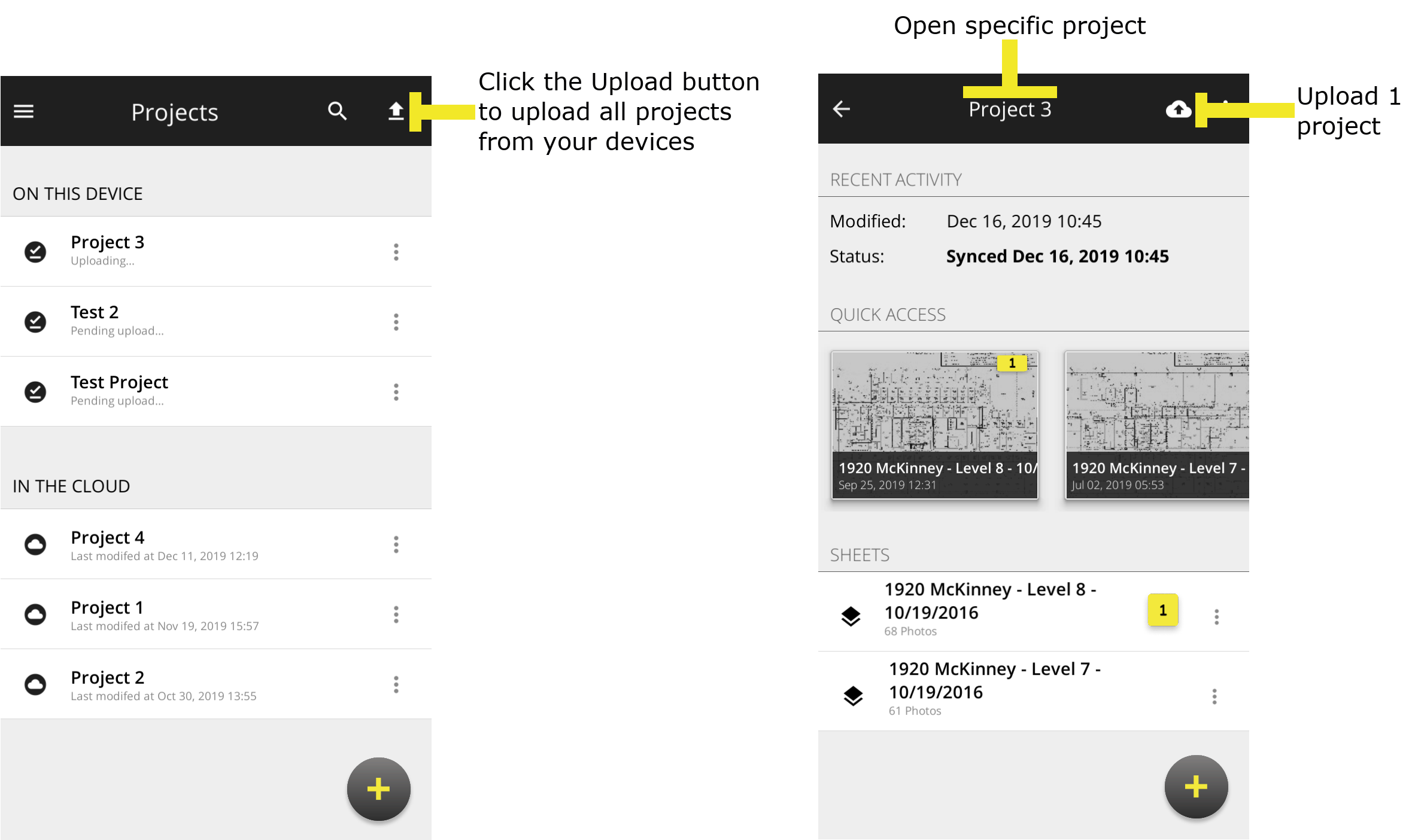 Learn more about working with the JobWalk App

Did this answer your question?