All Collections
Web Viewer
Working with the Web Viewer

Working with the Web Viewer

Learn how to use the Web Viewer to experience your project in an intuitive and interactive way.

Our Web Viewer allows you to experience your project images in an entirely new way and "walk" through your projects.

Looking around in a 360 scene

If you want to experience the entirety of a scene that is opened in the Web Viewer, you can easily "look around" by...

Click and hold anywhere in the 360 image. Drag the mouse to the right to "look left" and vice versa. You can also "look" up and down to see everything of the 360 degree image. It is even possible to zoom in and out of the image by using the scrolling function of your mouse.

In the Web Viewer, you can find a control panel on the bottom of your screen with arrows and + & - buttons. You can also use those to move your view in the 360 scene and to zoom in and out. The panel also includes further helpful features: full screen, share project and tutorial.

Moving from one 360 scene to another

There are several ways to switch between different 360 scenes in the Web Viewer:

Via the web editor it is possible to integrate different action objects in the 360 images. The Go To Scene  action object, for example, connects one scene with the next. You can easily move from one to the other by clicking on it. Learn more.

Alternatively, actions can be added with custom objects. Learn more. 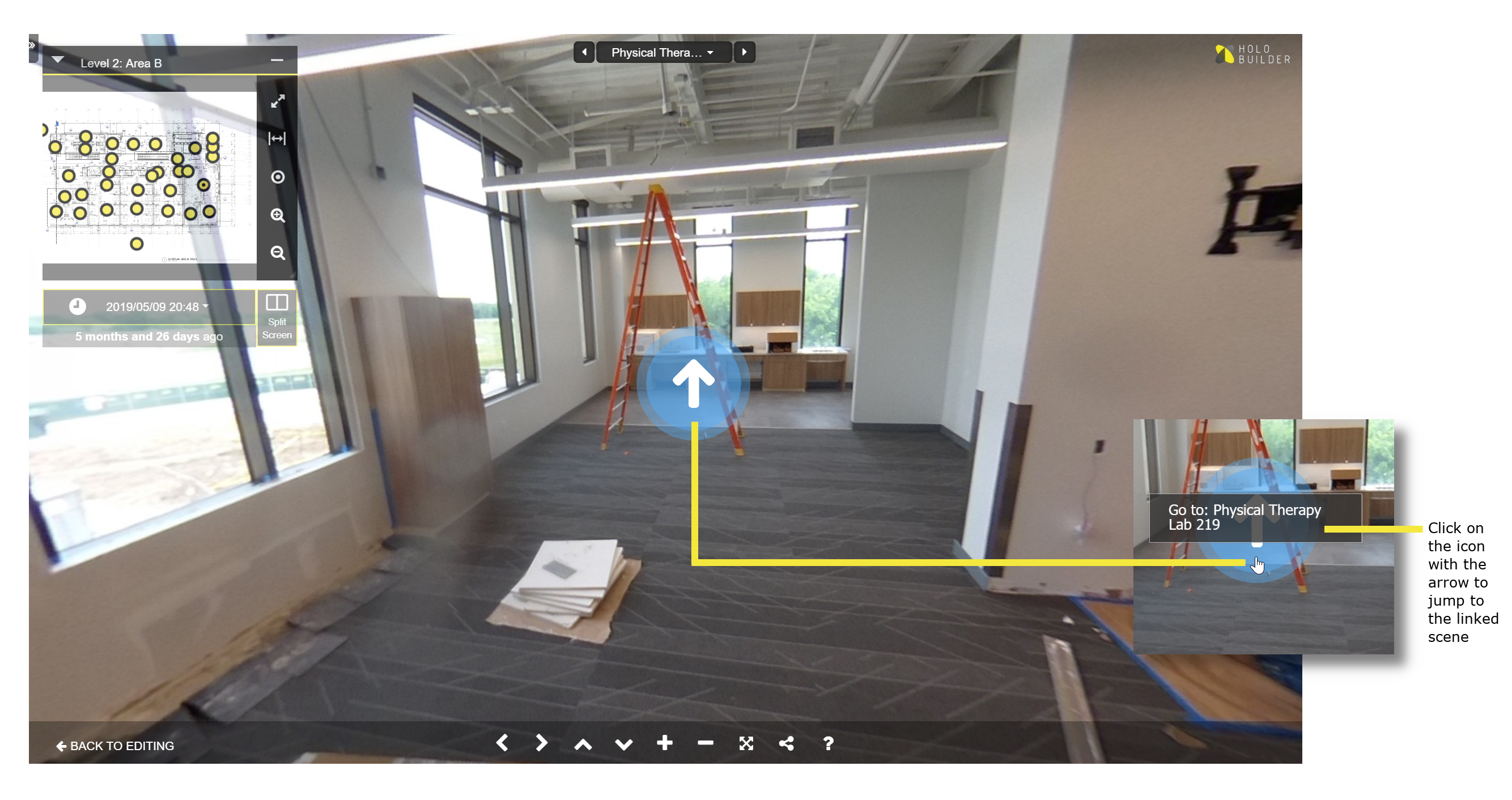 If you want to switch to a 360 scene that is not directly connected with your current scene through an action object/arrow, it is easier to make use of the list of all scenes that you can find at the top of your screen. By clicking on the name of the current scene, a drop down menu appears with all other scenes of the project. Now you can just click on the one that you would like to jump to. 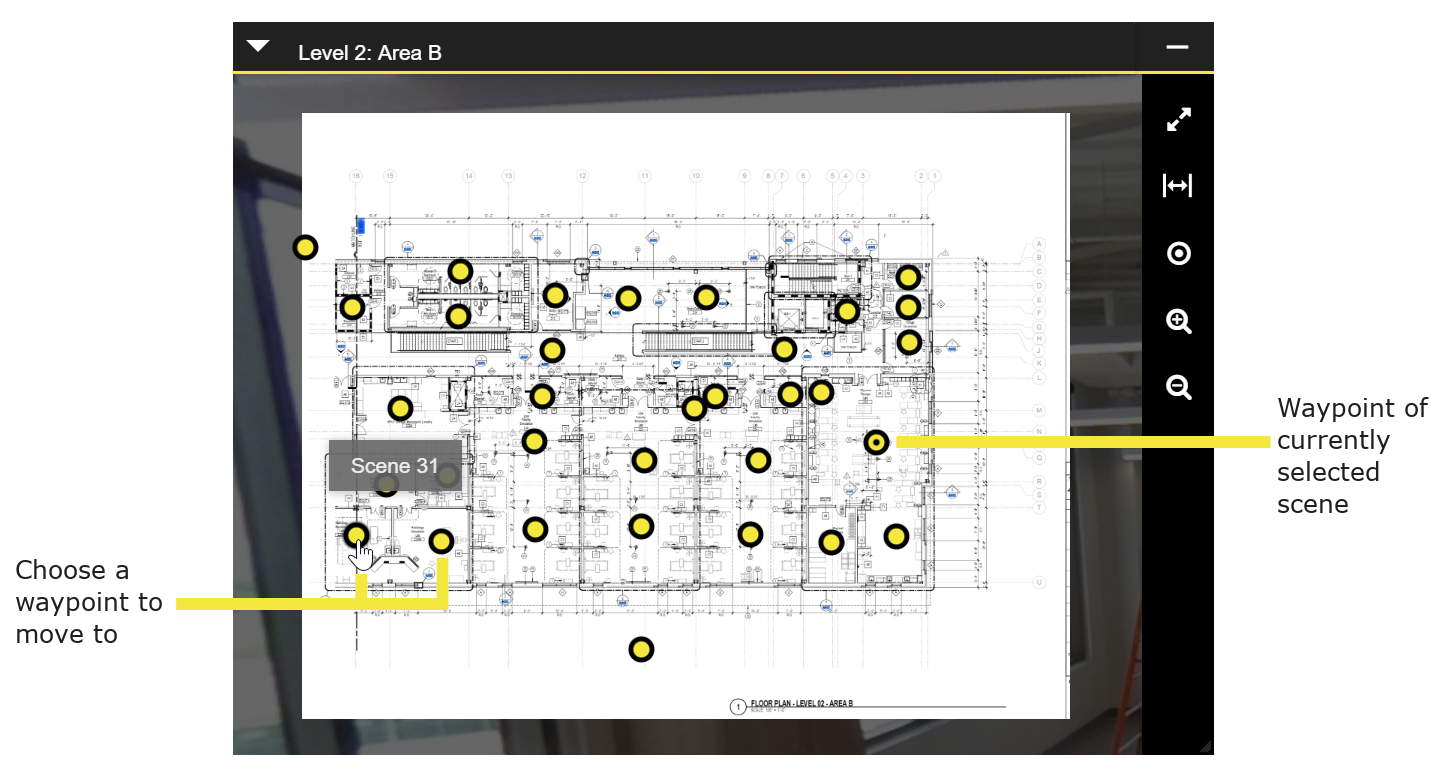 Besides switching your location, you can also jump in time for a selected location. Click in on the drop-down menu with the time stamp below the sheet map. Choose a time stamp from the drop-down to switch to another progress capture of that location. Learn more. 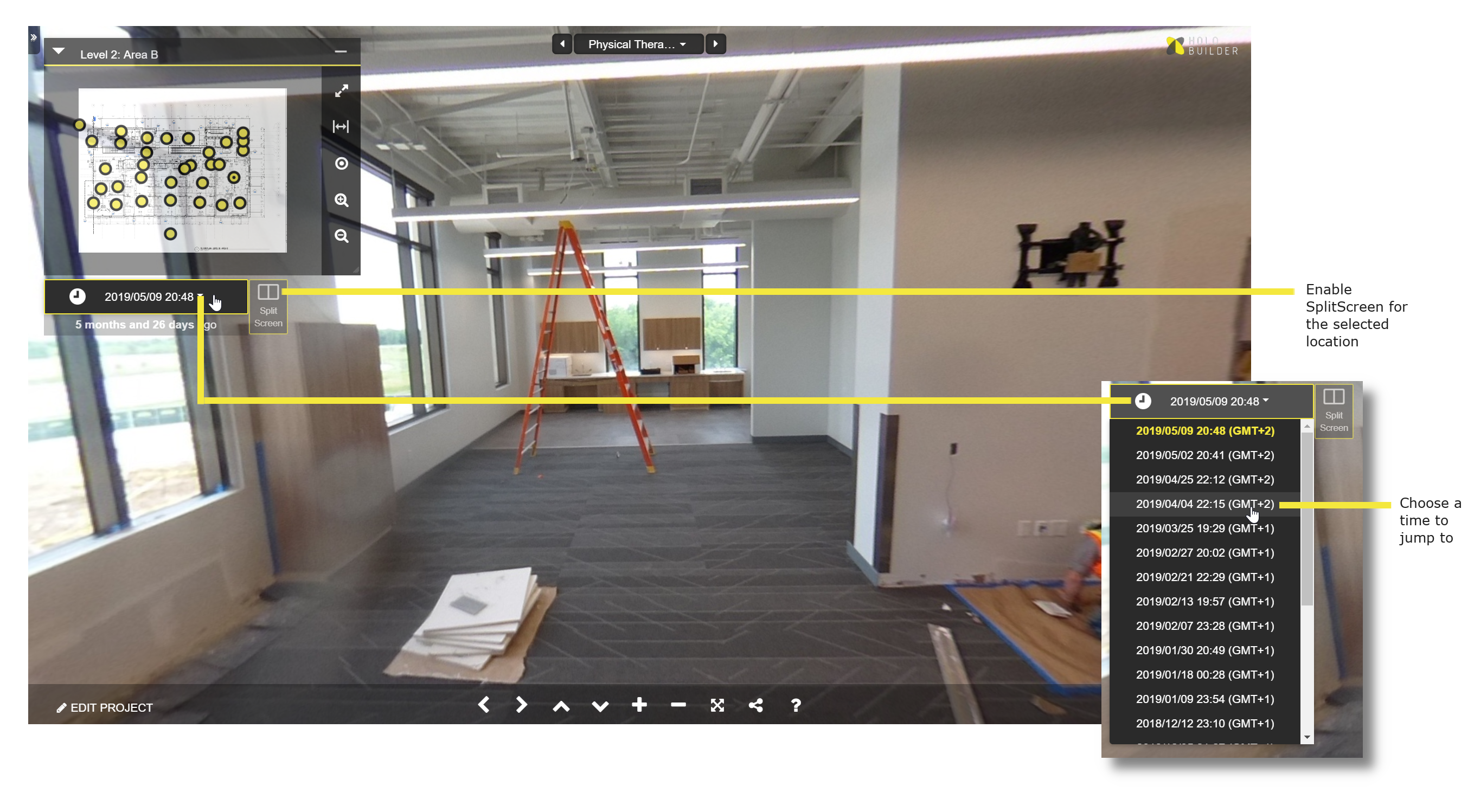 Compare the TimeTravel views in a side-by-side view with the SplitScreen option. Click on the icon on the right of the TimeTravel dropdown menu to activate the split screen and chose the times that you want to compare on each side of the screen.

Often, you come across different objects or markups in the HoloViewer that have been added to the scene via the web editor. The information they contain will be shown if you simply move your cursor across the object/markup or, in some cases, if you click on them.

Note: In order to see markups, they need to be enabled for the viewing more. Learn more.

Learn more about working with the web editor & viewer
Did this answer your question?