Adding Markups directly in your 360° scene

360 Markups can be used to highlight different aspects in a scene and keep a record of these for better tracking and more complete overview.

HoloBuilder Markups are annotations you can add to your 360° images. They can be used to visually highlight specific details or areas within a scene for better documentation and collaboration.

Markups can be a very helpful tool when informing stakeholders about detailed information within a project, and can also be used for advanced collaboration and issue management with the right integration.

This tutorial will show you how to do the following in the Web Editor:

Note: All project members with a Project Editor or Admin role as well as the related Project Manager, any related Group Managers, and the Enterprise Admins can create and adjust Markups in the Web Editor or JobWalk app. Only Project Editors, Admins, and the Manager of the project can be set as 'Assignee' of a Markup.

Open the Markups tool list by clicking on the Markup icon 🖊️ on the right side of the Web Editor. The tools will be expanded to the left. 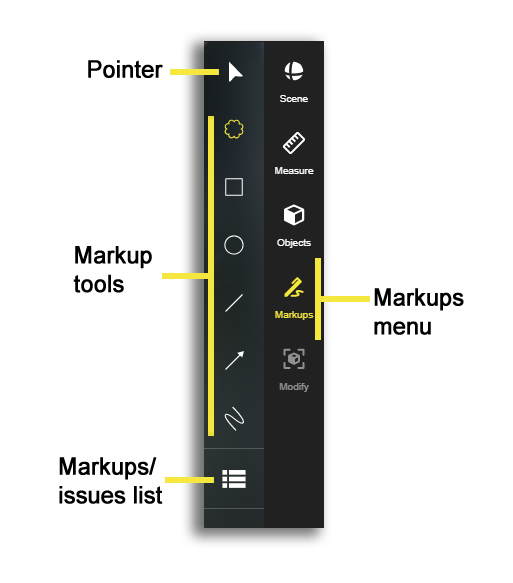 Note: Click again on the 'Markups' icon to close the Markup tools again.

There are six different markup drawing types that can be used to annotate a 360 image.

☁ Cloud drawing
Highlight areas with the standard cloud form also available, e.g., in certain drawing management tools. Each cloud drawing will be saved as an individual markup object to be moved or edited individually.

⃝ Circle
Circle aspects in a scene with a regular circle or ellipse. Each circular drawing will be saved as an individual markup object to be moved or edited individually.

╱ Line
Draw individual lines in the scene. Each linear drawing will be saved as an individual markup object to be moved or edited individually.

↙ Arrow
Point out details in the scene with individually adjustable arrows. Each arrow drawing will be saved as an individual markup object to be moved or edited individually.

Adding a Markup in the Web Editor

Edit the Markup details in the Web Editor

To edit an existing Markup in a HoloBuilder project in the Web Editor:

Delete and modify Markups in the Web Editor

Each markup will be added as an individual editable 3D object into the 360 image which can also be deleted or modified.

You can modify your Markups to move, rotate, and scale as needed. Additionally, you can also change the color. Learn more about your modification options in the HoloBuilder Web Editor in this tutorial. 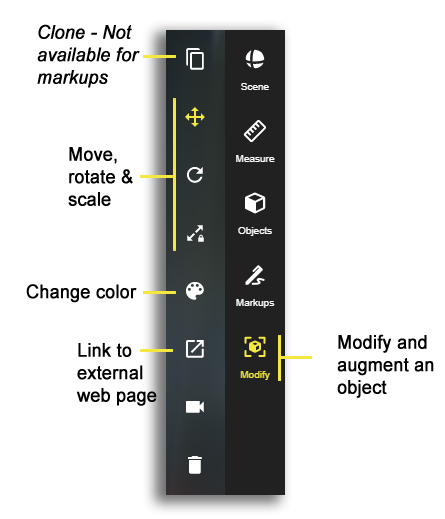 In order to remove a Markup from your project, select the corresponding Markup in the 360 image and click on the recycling bin that appears in the menu on the right.

Alternatively, you can open the context menu by right-clicking the Markup and selecting "Delete".

Confirm if you are really sure you want to delete the selected issue. Please note that deleting a markup cannot be undone and will be a permanent change.